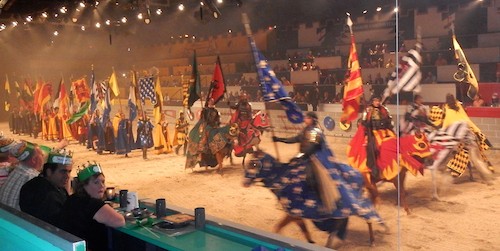 Medieval times were feudal times, turbulent times, violent times, Life was either hard work or boring. Only nobility and knights had wealth, power, status. Only they were allowed to dress fashionably. Foods were simple–meat, fish, game birds, fruit, bread with herbs and spices only for the rich. Drinks were ale, mead, cider, and wine not unclean dirty water.

How does one explain Middle English romances, courtly love, wars, and tournaments to anyone perhaps a thousand years later? The entertaining way is to attend Medieval Times Dinner and Tournament.

I am a regular at the Orlando dinner show (see my May 20, 2011 and November 1, 2012 posts). I enjoy chivalry, rivalry, and revelry. How about you? Orlando’s castle complete with drawbridge, moat, and detailed doors doesn’t have a bad seat in the house. The huge stadium arena is the perfect show place for great horsemanship, equestrian kill, dressage, beautiful white Spanish horses complimented by the speed, agility, and beauty of falconry.

Now this is the way to educate an audience. Growing up my kids called me medieval. Not true! Not true! Medieval times meaning the 11th through 15 centuries centered on a male-dominated society. Time changes everything. Now this is the 21st century and like the commercial goes, “We’ve come a long way, baby.” Suffrage, political equality, social culture, and financial equalities are real. We are are what we make of ourselves.

Have you ever been to Medieval Times?