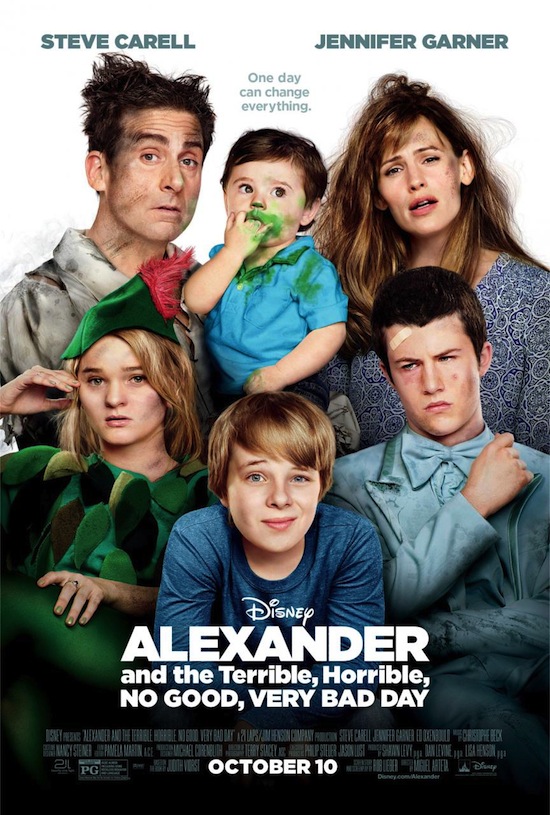 I received admission to this film. This post has not been monetarily compensated. Please note that any personal opinions reflected in this post are my own and have not been influenced by the sponsor in any way.

I always warn my family, “Be careful of what you wish for. You just might get it.”?Alexander and the Terrible, Horrible, No Good, Very Bad Day is a case in point.

Poor 11-year old Alexander Cooper (Ed Oxenbould)’s has his share of misadventures–gum in hair, skateboard mishap, carpool problem, accidental fire in class, Becky Gibson’s lack of interest, him, best friend Paul abandoning him, no one coming to his own birthday party, topped by no one in the family having any sympathy. No wonder his birthday wish is a bad day for his whole family! Then his wish comes true.

Calamities abound. Parents oversleep. Mom (Jennifer Garner)’s car battery is dead. Dad (Steve Carrell) has an interview and the baby must accompany him. Mom is responsible for an embarrassing reading. Brother (Dylan Minette) accidentally decks a banner and shelving. Sister (Kerris Dorsey) gets drunk on cough syrup. Brother fails driving test then wrecks the family car. Dad causes a fire at the restaurant. Brother’s prom is spoiled. But all is well that ends well because Alexander’s whole family gets one another through every mishap stronger than ever.

My Opinion Only:
PG-rated?Alexander and the Terrible, Horrible, No Good, Very Bad Day is a parody on life that works because of decent scripting and solid casting. Ed Oxenbould steals the show. The supporting cast of established actors and young talents compliment his genuine talent. Its theme “Family Matters” is too often forgotten in a hustle and bustle world where peers all too often are more important than flesh and blood.

Here are some clips.

“Effort On The Potty”

“This Day Was Cursed”

All press materials can be downloaded here: http://www.wdsmediafile.com/walt-disney-studios/Alexander/