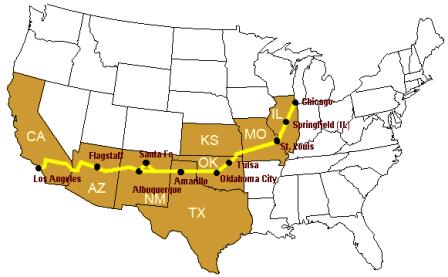 Back in 1926 a semi-continental superhighway west was being built. By 1933 its 2,300 miles of continuous pavement from Chicago to Los Angeles was complete. It would go through eight states, namely Illinois, Missouri, Kansas, Oklahoma, Texas, New Mexico, Arizona, and California. Along the way travelers would pass through cities like St. Louis, Tulsa, Oklahoma City, and Albuquerque. The name of the road was America’s historical Route 66.

Route 66 was the avenue for 1939’s farmers escaping the Dust Bowl. A few years later it was the road for WW II soldiers and supplies transportation. Then time and travel took their tolls. Narrow pavement along the way, poor road conditions, and a rise in tourism made travel on it difficult.

The Federal Highway Act of 1958 doomed it when it brought a national interstate highway system into reality. A modern four lane highway was in place by 1970 that passed poorly maintained Route 66 in most parts. The rest succumbed in 1984 to Arizona’s Interstate 40.

Route 66 has been decommissioned. Its signs have been removed. It is no longer on the maps. However, pieces of it still exist going through the little towns. While traveling west, hubby and I took some time to stop along the way and see bits and pieces of our Mother Road’s earlier history. We even found a Theme Stop in a Texas DOT Safety Rest Area along I-40.

We took pictures but not enough to tell the whole story. If you want to learn more or take a scenic tour of its miles, google Road Wanderer Home/Route 66 Home/Western Americana Gallery. I learned a lot and delighted when I recognized some of the places and attractions I saw westward ho.